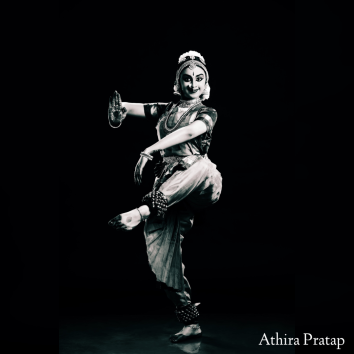 Athira Pratap has been learning Bharatanatyam since the age of 4 and later Mohiniyattam under the guidance of her mother, Guru Bindu Pratap, disciple of Smt.Meera Nambiar/Padmabhushan Dhananjayans and the artistic director of Nritanjali Dance Academy. She has been named a 2016 YoungArts National Finalist, a 2013 Cleveland Thyagaraja International Dance Festival Winner, the youngest World Arts West Ethnic Festival soloist in their 30-year history in 2010, and Asianet’s North American classical dance winner. She was also blessed to perform repertoires at the Guruvayur Temple in Kerala, India and Cleveland Thyagaraja Festival. She has performed in numerous festivals, platforms, and productions locally and internationally, including Sri Madurai R.Muralidharan’s “Sense Beyond”, Sri Kanniks Kannikeswaran’s “Indus Spirit” at the TiEcon World Conference, and Chinmaya Mission’s “One In Eleven”. She has furthered her training from workshops by Kalaimamani Anita Guha and Sri Guru Madurai R. Muralidharan. Currently, she performs as a principal dancer for Nritanjali Dance Academy and has helped choreograph and teach for productions, including “Nartana Malika”, “Samanya”, and “Dakshina”. Her most recent work in choreography was for Yuva Bharathi’s Kalpana 2019 where she presented “Smriti” in the Mohiniyattam art form. She hopes to grow as a performing artist and create spotlights on social issues through Classical Indian art forms. Athira Pratap is currently a Deans Scholarship student in her junior year pursuing a neuroscience degree at the University of Southern California in Los Angeles where she continues to explore her creative pursuits for the performing arts.